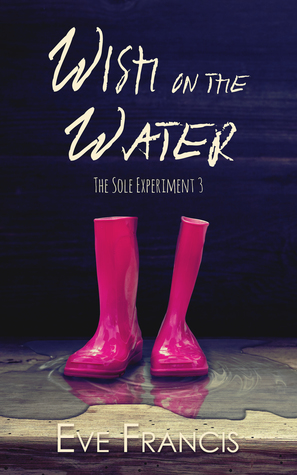 When I first saw Wish on the Water by Eve Francis I thought it sounded interesting. There are not many books that focus on genderqueer relationships and it was nice to see this type of diversity in a romance novel.

Here is a short blurb about the book:

When Whitney finds a pair of bright pink rain boots for her daughter Cayleigh, she thinks nothing of it–until the rain boots turn Cayleigh into a greedy monster who wants everything at once. Tired and frustrated one morning, Whitney runs into Chantal at a nail salon. When Chantal magically calms down Cayleigh, Whitney starts to crush hard in spite of her busy schedule and Chantal’s eight month pregnancy.

Chantal Mackenzie considers her pregnancy to be the stuff of legends. Not only does the baby not have a father, but Chantal doesn’t consider herself a mother. After years of gender confusion, Chantal finally believes she’s found the right label of genderqueer for her body and her feelings about it. Upcoming parenthood and her growing attraction to Whitney are both exciting–but also complicating as Chantal struggles to find the perfect term for her as a parent and ways of living in an aggressively gendered world.

A pair of neon flip-flops that seem to make Chantal ravenous, along with her increasingly vivid dreams about being a sorcerer, also make the last few weeks of her pregnancy memorable. As the due date draws closer, Chantal and Whitney’s relationship heats up, and the two start to feel as cursed as they do cosmic.

I wanted to like this book more than I did. I just couldn’t get into the relationship between Whitney and Chantel. They had no depth to their relationship. Everything went perfectly for them and moved so quickly. While I am not a huge fan of angst in romance novels there does need to be some turmoil which brings the couple closer together, which I feel this book was lacking.

Even though I didn’t like the relationship aspect of the novel I did enjoy Chantel’s pregnancy. I thought it was interesting to see their view of pregnancy. I like how Chantel experienced pregnancy on their own terms and stood up for what they wanted. I have never seen this type of take on pregnancy before and it drew me into the novel.

While I wasn’t wooed by the relationship aspect of the book. I would still recommend it to anyone who is interested looking for a lighthearted read.

Thanks to the publisher and NetGalley for the opportunity to read and review this book.

If you would like to read this book if can be found at Amazon.